Another FANTASTIC Bart’s Bash In Antigua! 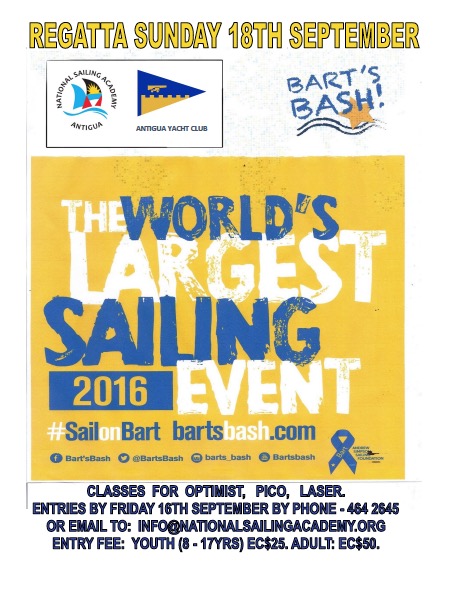 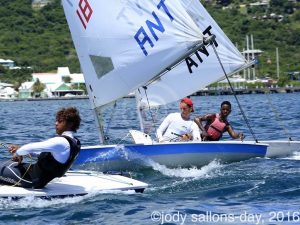 On September 18th 2016 AYC and NSA joined sailors around the world and participated in the 3rd Annual Bart’s Bash.

The day in Falmouth Harbour, Antigua, dawned hot and sunny with a little less breeze than usual (thanks to the AYC’s Chief Instructors namesake TS Karl developing to the east of us!). To make a full day of it the Powers That Be had decided to do a “Mini Regatta” during the morning, a yummy lunch of Chilli at the NSA, and the Bart’s Bash as the Grand Finale in the afternoon.

The Mini Regatta comprised of 4 (5 for the Lasers) races for Lasers, Laser Picos, Laser Omegas, Optimists and one 29er with 37 competitors, the youngest being Tyden Jones at 5, in command of his very own Optimist (he’d been in training all day to say he was 8), and the oldest was Geoffrey Pidduck at 78, who was fortunately joined by his youthful crew Janie on one of the Omegas.

For the Bart’s Bash we were joined by the NSA Sailabilty Challenger Tri-marans, for a contest between the AYC Commodore Franklyn Braitwaite, being helmed by his daughter Sharifa and the AYC Rear Commodore Ashley Rhodes, being helmed by the second youngest competitor, Micah Archibald.

There is also a small sample of some of the stunning images captured by Antiguan photographer Jody Sallons-Day here 2016 Bart’s Bash Gallery. Some of you Mums & Dads might like to keep the memories of your kids having a lot of fun at this event!