We have a vibrant Youth Training Programme

A lot to be proud of!

ANTIGUA YACHT CLUB WAS FORMED IN 1967

The English Harbour Yacht Club was founded on Tuesday 21st November 1967.
The founders were Mr. P. Deeth, Mr. & Mrs. A. Copeland, Mr. C. Schumacher, Mr. & Mrs. D. Nicholson, Mr. & Mrs. Lassabliers, Mr. J. Clegg and Ms. S. West.
On the 9th September 1969 Commodore, Peter Deeth, reported that the cabinet had approved the grant of land at Falmouth Harbour for use by the Yacht Club. On 23rd June 1970 the Commodore reported that a lease had been completed by Rowan Henry. It was signed by the Trustees and the Governor General on 13th April 1971. The lease was recorded and the matter was satisfactorily concluded.
The first Yacht Club building was erected in 1970 by Jack Paterson. At the AGM of Sunday 21st May, 1972, the club name was changed to Antigua Yacht Club.
The Yacht Club Executive Committee and members have used their best endeavors to promote the sport of sailing including, but not limited to Antigua Sailing Week, Antigua Classic Yacht Regatta, RORC Caribbean 600, the Superyacht Cup Antigua, weekly dinghy racing and youth sailing programs.
Origins
In the mid 1960’s, two new hotels – The Inn at English Harbour, owned by Peter Deeth, and the Admiral’s Inn, a leading light of which was Desmond Nicholson, started to race against each other on Sunday mornings, using the hotels’ Sailfish (predecessor of the Sunfish). Each hotel had three Sailfish and team racing took place in Freemans Bay. Competition was fierce, a trophy was obtained and at the end of racing each Sunday the victorious team carried off the trophy, which then sat in a place of honour in the bar at The Inn or Admiral’s Inn until the following Sunday. The trophy spent most of its time at The Admiral’s Inn as they could always field a team of “hotshot” helmsmen such as Jol Byerley, Peter van der Sloop and Richard “Hot Screws” Scott Hughes.
From this successful activity the idea was born of starting a local sailing club or yacht club. In1967, a small informal meeting of just a few people took place one early evening in The Admiral’s Inn bar. Present were Peter Deeth, Desmond Nicholson, Andy Copeland, John Clegg and one or two others. It was decided to form a club to hold Sailfish races in English Harbour and to start recruiting members. This was done with enthusiasm, word spread and there were soon a good number of sailors and supporters who all became members of what was to be called “The English Harbour Yacht Club”. Peter Deeth was elected the first Commodore. Membership fees were very low – the “Club” had little to offer. No clubhouse, no boats and only the opportunity to race or watch races on Sunday mornings. The Admiral’s Inn was that time the social centre of all things nautical in Antigua and Ethelyn Phillips, the Manageress, gave permission for races to start from the dock at the bottom of The Admiral’s Inn lawn. A Club bar was operated on the dock and the revenue from this, plus entrance fees for racing and membership fees, became the foundation of the Yacht Club finances. The Sunday morning racing soon became the social event of the week in English Harbour and there would often be a hundred or more people turning up to chat, enjoy the scene, and in some cases to actually race. The “Clubhouse” became a large box on the dock in which was kept all the paraphernalia for racing plus essentials for the bar.
The Club was run entirely by enthusiastic volunteers. There were no expenses and ever increasing revenue. Eventually, the finances became strong enough to consider actually having a proper clubhouse and better racing in more open water. Falmouth Harbour was the obvious choice.
In 1969, an Extraordinary General Meeting was held on the lawn of the Admiral’s Inn and a proposal was made to move the Club to Falmouth and build a clubhouse there. Despite considerable opposition, the vote was carried. The Commodore negotiated with V.C Bird, the Prime Minister, to obtain a site in Falmouth and this was eventually granted.
In 1970, Jack Paterson, a member and a contractor, was subpoenaed to build the clubhouse, and when it was up many enthusiastic volunteers turned out for a “painting party” to finish it off.
Racing continued every Sunday – all day now. There was a barbecue lunch and the Club continued to be a great social, as well as sailing success. Everything was run by volunteers and thus the Club finances continued to prosper. As well as racing Sunfish a string of six 420’s were brought in Guadeloupe and towed over to Antigua by volunteer yachtsmen.
In 1972, the Club’s name was changed to the Antigua Yacht Club. 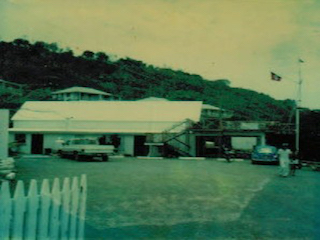 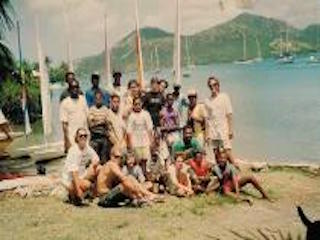 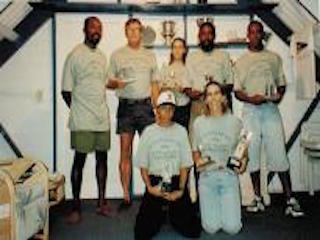