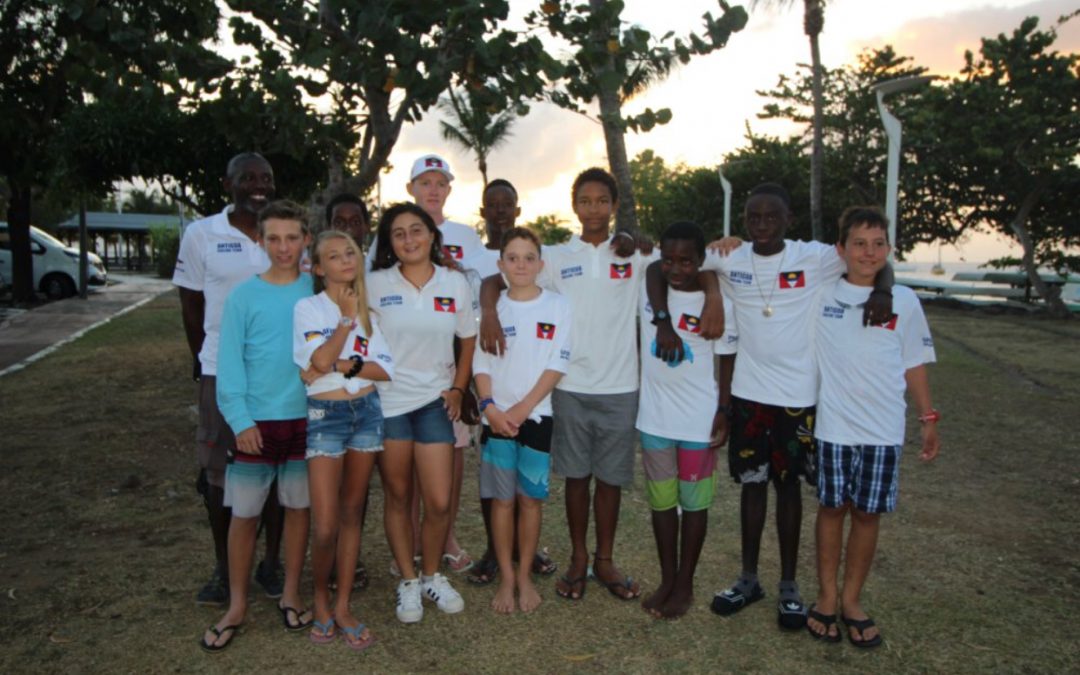 Ten Optimist sailors and 2 Laser sailors from the AYC Junior Sailing Program, under the direction of Coach Karl James, travelled to Martinique earlier this month for the Schoelcher International Sailing Week Regatta held March 1 – 5.  The Optimist sailors who competed in this international event were: Theodore Spencer, Tyrique Adams, Sue Agusti, Maurice Belgrave, O’zani Lafond, Alistair Knoblough, Daniel (Joshua) Angling, Diego Ewinger, Brice Batrick and Brianna Batrick.  Daniel Smit and Giles De Jager competed in the laser radial and 4.7 respectively.  This event is one of the qualifiers for the selection of the 2019 Optimist World Championship, and a ‘warm-up’ for the team travelling to Chile on April 3 for the 2019 Optimist South American Championship. To manage the logistical challenges, the team travelled to Martinique aboard the Exile Explorer on the evening of February 27, arriving in the early morning of the following day.  This plan permitted the sailors to bring their own equipment and to save on charter costs, as well as providing a full day to recover from the travel and get organized.  Sails were measured, and a couple of hours were spent on the water in very windy conditions of plus 20 knots.    The following day, March 1, was also a training day, and the registration completed.  Everyone enjoyed the Opening Ceremony held later that day.On the first day of racing, 3 races were run for all fleets.  The AYC Optimist sailors had a good showing with Theodore in 2nd place, Tyrique Adams in 3rd and Sue in 4th.  In the Laser fleet Daniel finished in 3rd on the first day with Giles 2nd in the 4.7.  By the second day, the sailors started to feel more comfortable in the waters and  held their positions, in spite of the extremely windy and shifty conditions.  The most challenging day was the third day of racing (March 4).  It is the typical day in a week – long schedule when sailors start to succumb to fatigue, especially when the winds blow hard consistently every day.  Unfortunately, there was a U flag penalty for Theo, the top AYC Optimist, and all positions dropped down one or two places.  The final day of racing, March 5, saw the team consolidate their standings.  Out of the fleet of 37 sailors, all AYC Optimists did very well.  Theodore Spencer finished 4th; Tyrique Adams was 5th; Sue Agusti was 6th and the top girl; Maurice Belgrave was 9th; O’Zani Lafond finished 10th ; Alistair Knoblough was 19th; Daniel (Joshua) Angling was 20th ; Brianna Batrick finished 35th.  Diego Ewinger raced in the younger category (the Benjamins)  and placed 7th overall. It was the first major event and great effort for Alistair Knoblough, Diego Ewinger, Tyrique Adams, Daniel (Joshua) Angling, and Brianna Batrick.  Both Alistair and Brianna thought they would be racing in the 11 and under category but were moved up to the advanced fleet where they bravely met the competition.    Brice Batrick raced for St. Lucia and finished a very respectable mid-fleet 17th.   Daniel Smit finished 2nd in Laser Radial and Giles de Jager finished 4th in the 4.7 class.A huge thank you to the following parents, David Batrick, MacGyver and Yanni for their help with chaperoning the kids throughout the week.  Thanks to Simon Holt for again providing the kids with great looking Team Antigua shirts.  The team would not have been able to make it to Martinique without Andreas as Captain of the Exile Explorer, who along with the invaluable assistance of crew Louey and Tommaso,  deserves much thanks from the AYC Junior sailors all round.  Not only was the overnight voyage a unique experience, but with such a large team, it was the most feasible option and enabled them the advantage of bringing their own equipment.