Colourful parade of nations to kick off championships 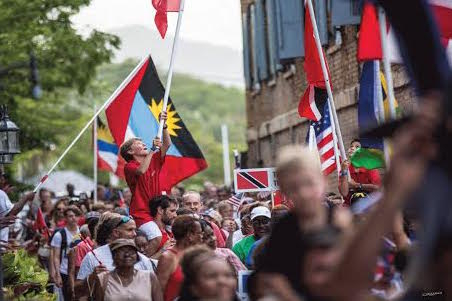 A VIBRANT opening parade of 65 participating nations brandishing their country flags will kick off the much-anticipated 2019 Optimist World Championship this Sunday.

Members of the public are invited to turn out in their national colours and join the walk departing from the National Sailing Academy in Dockyard Drive at 5pm.

Live music will accompany the parade to Nelson’s Dockyard where a ceremony will take place to introduce each team. There will be performances from the National Youth Choir, Asher Otto and Tizzy, and a firework display.

Attendees are advised to arrive early to allow time to park.

Meanwhile, teams from across the world are continuing to arrive in English Harbour daily. Around 260 young sailors aged 11 to 15 plus their supporters will be on island for one of the globe’s most prestigious youth sporting events.

Among the latest groups to land is Team Cayman Islands. Country representative Jennifer Marshall said they were thrilled to be on the ground.

“We are all having a great time and are very relieved to have passed measurement and registration. The boys are enjoying the big waves in training too,” she added.

Antigua’s national team were officially introduced to the public on Monday. They are Sue Agusti, 15, Tyrique Adams, 14, Theodore Spencer, who turns 13 this month, Maurice Belgrave, 12, and Shanoy Malone, 11.

The 2019 Optimist World Championship is being staged in Antigua for the first time in its history from July 6-16. A record-breaking number of countries are taking part.