Round the Island Race – results 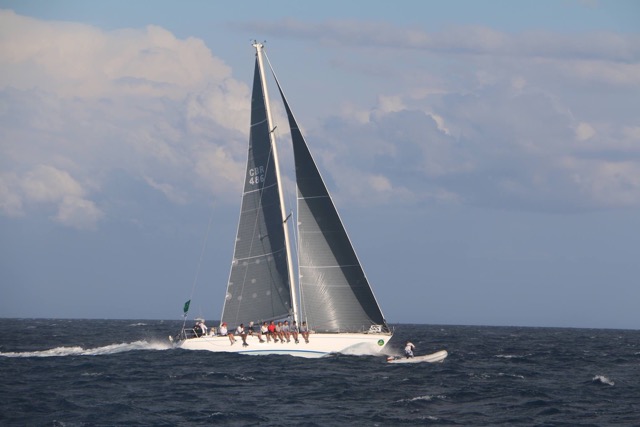 This event was held as tradition – third Saturday in January – on Saturday 21st. Jan 2017.   NINE boats took part in two classes A and B

Unfortunately the wind gods did not oblige (January in Antigua !!!)  and it was not possible to sail right around the island.  However an alternate shorter – but open sea – course of 26 miles was laid to Indian Town Point (Devil’s Bridge) and back.  However in the very light and fickle winds prevailing even this proved much too long for the Class B cruiser class of whom nobody finished and times were taken at the first rounding mark at Green Island for a result.

However the four Race boats in Class A had a good race with all except Liquid managing to finish within the 5.30 time limit.

Class B sailed slowly and pleasantly as far as Green Island before mutually agreeing to turn around – and by 3.30 pm when it was obvious no one would get home by 5.30 pm. engines were turned on.

Taz caught a fish, the bottom was visible at 60 feet, the sea was calm, and a very pleasant day out was enjoyed by all.    The evening AYC  prizegiving party was also thoroughly enjoyed.  Richard Archer, skipper of winning boat (Regardless) won his weight in Rum – kindly again sponsored by Antigua Distillery – a big thankyou from the AYC, – and  also the “Sleeper Trophy” as Overall Winner.    Unfortunately the “Sizzling Bacon Trophy” for the fastest Elapsed Time (Rebel – Sir Hugh Bailey) could not be awarded this year as that is allocated  for racing ‘right around the island’

Richard Fear won the rude golf, and, to great applause, Miss Regardless, looking very sexy and beautiful was crowned “Queen” for a year.  The other “ladies” sulked and pouted, their obvious beauty not being properly appreciated by judges Robbie Cook and JoJo.   English Harbour Radio provided music and a live broadcast of the evening and promised the Yacht Club some “serious advertising” for next year’s event.

Class A and Overall

AYC thanks all competitors – both sailing and shoreside –  and particularly our Sponsor Antigua Distillery for their generous support.  And of course huge thanks to Clare and her team as Race Officer.