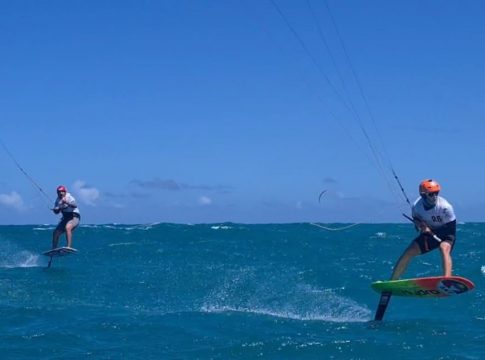 Antigua and Barbuda kite-boarder Tiger Tyson added another piece of hardware to his trophy cabinet when he emerged the overall champion of the Formula Kite Grand Prix tournament held in Cabarete, on the Dominican Republic’s northern coast, and which concluded on Sunday.

The national athlete dominated with first place finishes on all four days to emerge the overall winner of the competition.

In the women’s category, which remained firm from the start of the competition, Kirstyn O’Brien of the USA finished in first place, with Kimberly Risbergen of the Netherlands in second, and Marina Vodisek of Slovenia in third.

For four consecutive days, 17 athletes from eight countries competed in winds of eight to 18 knots, in the famous wind and waves of Cabarete, Dominican Republic.

Following the event, Tyson said that it was very fun and exciting to compete in conditions as spectacular as those offered by Cabarete and it was a lot of pressure to stay in first place while competing with athletes so qualified in this sport.

Previously, Tyson dominated the Mexico Formula Kite event, winning all six races in which he competed.

The event, which is the first one for 2022, gave the Antiguan 50 points towards the 2022 Formula Kite ranking. He represented the Antigua Yacht Club.