The Optimist Worlds; one of the few competitions where girls and boys compete together 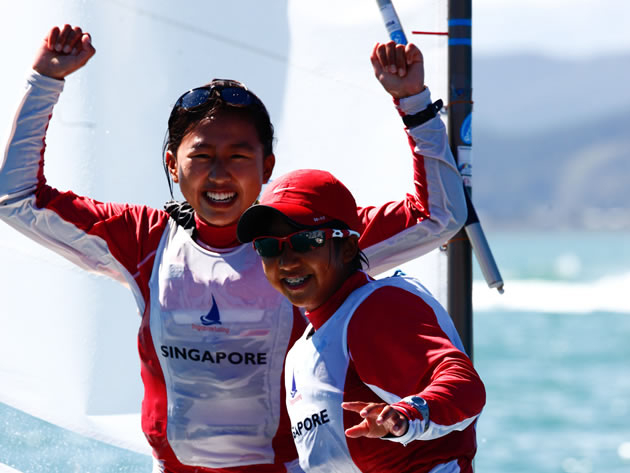 Optimist sailing is one of the few sports where girls and boys compete alongside each other.  This has been the case from the earliest fleets in Florida, however until the mid 1980s, very few female sailors gained selection for their national teams.

By 1985 girls had 2 options; to qualify for the Worlds and race against the boys, or to compete for the reserved places in a girls only fleet at the Europeans (which from 1988 were open to non-European sailors).

The IODA European Championships had separate girls and boys fleets from 1985, with 2 out of 7 places per nation reserved for girls.  In 1986 the IODA AGM debated whether the same should happen for the Worlds, but this was rejected, largely because the female sailors were adamant that they wanted to qualify in competition with the boys and having done so, sail against them at the Worlds.

The following year, 1987, Sabrina Landi of Italy won the Worlds outright and never again was there much support for a separate girls’ fleet.

Since 2012, all Continental Championships have had a gender requirement (ie a certain number of girls need to be included in each team).  This was introduced by IODA to encourage girls to develop in sailing and make sure they were supported within the sport and has had a direct and positive impact in many countries.  The same is still not applicable to the Worlds however as these are supposed to reflect the top sailors for every country regardless of gender.

The 2019 World Championship in Antigua will have a strong female presence.  15% of the sailors will be girls and 20% of the Antigua team will be female.  Women have also been the driving force behind the event as a whole with Paola Vittoria leading the organising committee, the Antigua Yacht club having a 50% female Board of Directors and 40% of the organising committee being women.

Many thanks to Robert Wilkes for his excellent book The Optimist Dinghy 1947-2007 which provided much of the early information in this article.