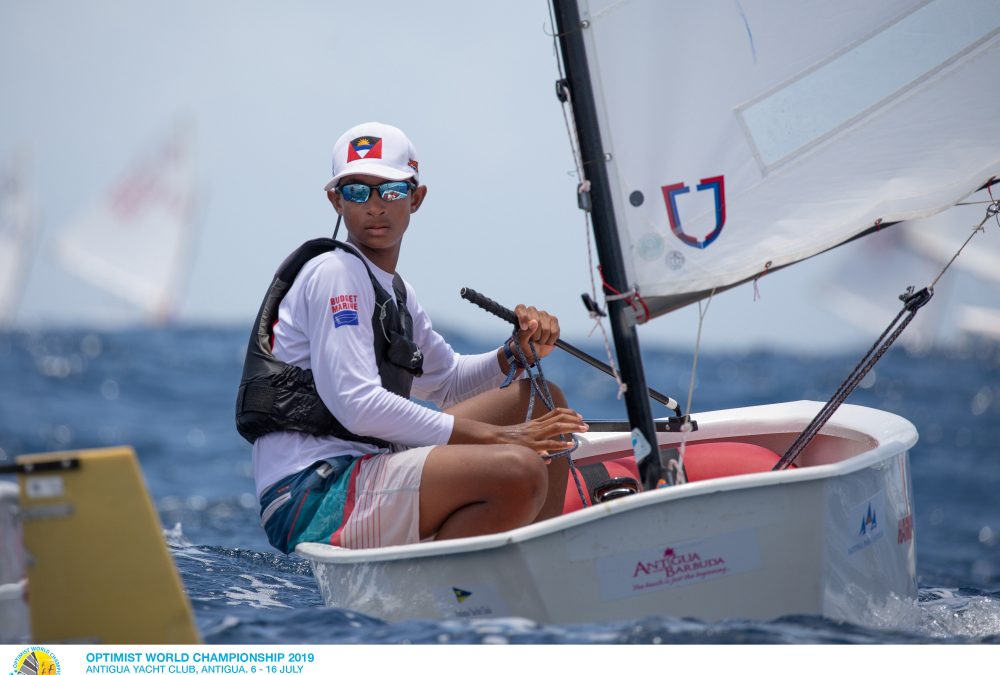 COMPETITION was fierce on the water on Wednesday as the young sailors stepped up their game during the third and final day of qualifying races in the 2019 Optimist World Championship.

Italy’s Marco Gradoni, 15, wrestled the lead from Malta’s Richard Schultheis, 14, who had held first place in the leader board since the races kicked off on Monday morning.

“Today was much trickier because the wind was coming off the rocks and was very patchy so I was not consistent, but I think I am still looking strong,” second-placed Richard said.

Ireland’s Rocco Wright, who turns 13 on July 28, was one of Tuesday’s eight winners, stomping home to victory in the green fleet in race six, the last of the qualifiers.

A misjudged move cost him valuable points earlier in the day, he revealed.

“I did pretty well in the first race on Tuesday, then I went too close to the cliff and lost places. But I managed to win the next race although it was very tight with three other boats,” Rocco said.

“The sailing conditions in Antigua are perfect. It’s windy in Ireland but we don’t get such big waves.”

The 12-year-old, part of Ireland’s team of five boys, said he has been competing internationally for the last two years.

“I just love sailing,” he continued. “It’s really fun and you get to make a lot of new friends.”

Thursday and Friday will see two days of invigorating team racing comprising a series of short sprints in Falmouth Harbour. Run as a separate event to the fleet racing, it provides a little welcome respite for the sailors before the hotly contested finals begin on Saturday.

“I have not done much team racing before but it’s really fun because you get to enjoy it with your team mates and it takes your mind off the main races,” Rocco added.

Also among the 255 sailors from a record 65 countries taking part in this year’s Optimists are five young hopefuls from Singapore.

“It’s our first time sailing with swells,” said 15-year-old Radiance Koh. “Antigua has much stronger winds than Singapore so we are really enjoying it.”

Currently placed between 111th and 119th, they are not doing as well as they expected, Radiance continued.

“But we are hoping we will be able to catch up. Our coach always tells us never to give up, even when we are not doing that great,” she explained.

“What I love most about sailing is how conditions can change in a very short amount of time,” he said. “The wind has been very constant which has helped us maintain our position and keep our points.”

Kenan added: “I really want to beat the sailors from USA and Thailand who are the same age as me; I really like to compare myself against other countries.”

In third place in the leader board is South Africa’s Ian Walker March, 14. Top placed girl is Spain’s Maria Perello, aged 14 and in 18th spot overall.

Host nation Antigua and Barbuda’s team of five earned high praise from Paola Vittoria, head of the event’s organising committee and a former Olympian sailor herself.

“This is their first big regatta and they are doing very well, especially Theodore,” she said.

“They are going steady; right now they are taking their first steps in an event of this size and already have a great result,” Vittoria continued.

“In a few years we can expect to see big things from them. I am really pleased with how they are doing. The most important thing now is to keep their spirits up.”

Vittoria said she was delighted with how the championship, hosted by Antigua for the first time in its 57-year history, had been received so far, adding: “I am really happy at the way everyone has come together to make it a success.”