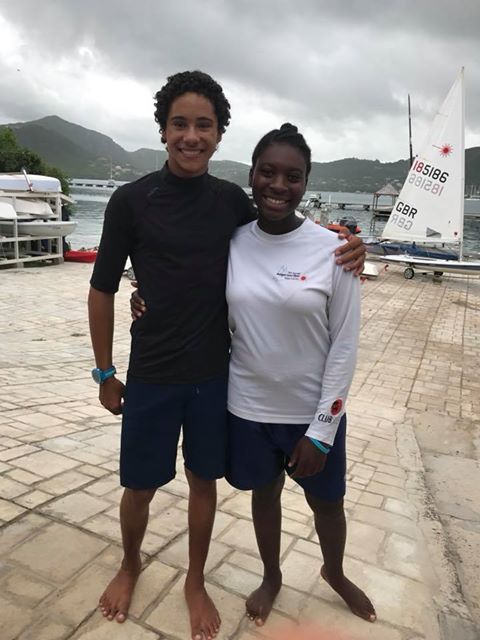 Last week AYC Laser sailors Jalese Gordon and River Andrews attended the World Sailing Emerging Nations Clinic and Regatta in Santo Domingo. Karl James, himself a two -time Olympic sailor in Laser class, accompanied them as their coach.
The event was the largest emerging nation clinic ever, with 27 sailors (11 girls, 16 boys) and 20 coaches representing 17 countries. All equipment and accommodation was provided. The days were intense with a 7 am workout, morning classroom, training on the water, and debrief at 7 pm.
Karl James summed up the week: “I think the kids totally enjoyed the experience. They met up with some old friends, made some new ones and practised their Spanish. At the end of the clinic portion there was a regatta, with one male sailor and one female sailor being offered the possibility of winning a scholarship to attend the Worlds in China in December. It should be recognized that this was the first Laser Radial regatta for both. Jalese finished third overall in girls, and River finished fourth in the boys. Both performed really well and showed that they were ready. Jalese won two of the six races, but the competition from Cayman’s Elena Rankie and Ecuador’s Romina De Iulio had more experience and won the day. River finished fourth behind Uruguay’s Luis Pedro Carrero, British Virgin Island’s Thad Lettsome, and Cayman’s Jesse Jackson. He was one of the lightest sailors but held his own in the heavier breeze. The experience was very valuable for them because the race course and compeition is what they will encounter at a World Championship. Jalese is training to attend the WS Youth Worlds in China in December and I am very happy she was able to have this opportunity to measure her current state of preparedness.”