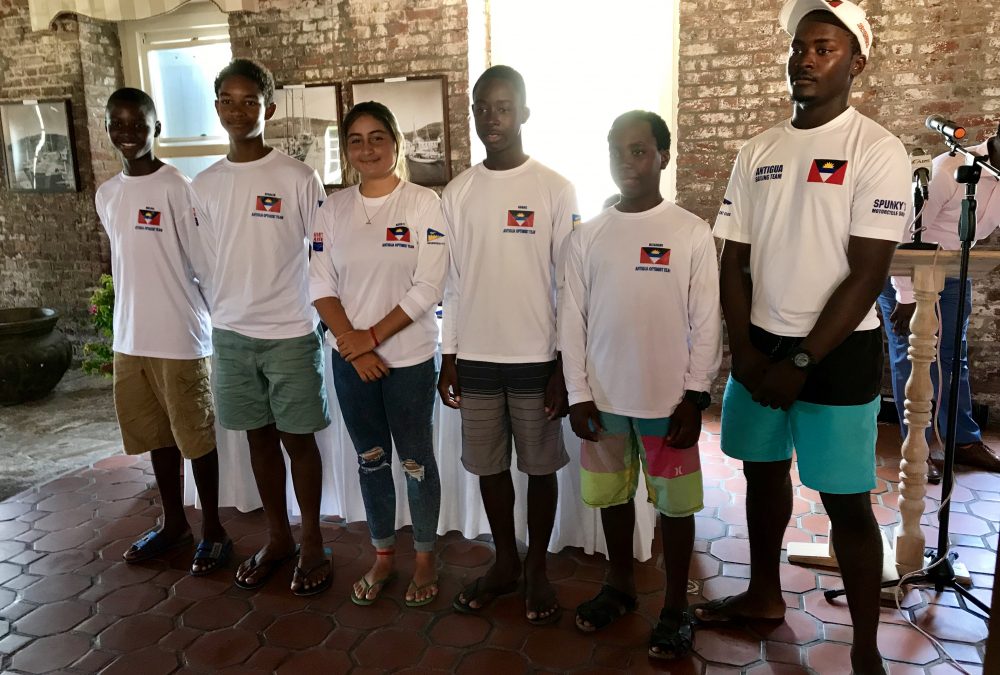 THEY may be young but they’re bursting with confidence and ready for the challenge of a lifetime. Antigua & Barbuda’s team of five youth sailors were officially introduced to the public this morning at a media launch ahead of the 2019 Optimist World Championship.

With just days to go before the event’s official start on July 6, the young stars have been hard at work polishing their skills in preparation.

“It’s been intense for the last week,” Agusti said. “We’ve been out practising, testing our tactics, such as when it’s necessary to tack. It’s going well; I’m pretty confident we can win.”

Agusti, originally from Spain, is no stranger to the sport having already crossed the Atlantic with her family twice before they moved to Antigua three years ago.

Colin James, CEO of the Antigua & Barbuda Tourism Authority, said he was “extremely proud” the nation had been chosen to host the championship for the first time in its 57-year history.

“It shows confidence in our country as a sailing destination, the facilities we have and in us as a people,” he said.

“We are looking forward to 10 days of fun and exciting races during one of the most prestigious youth sporting events in the world.”

James added that the championship had already brought hundreds of visitors to the English Harbour area during its traditional slow season.

Karl James, the event co-chair for race management, said he was delighted the championship had attracted a record 65 participating countries. He also praised the young national sailors who took part in several qualifying events, both at home at abroad, before being selected for the team.

Yacht Club Commodore and local sailing legend Franklyn Braithwaite paid tribute to the efforts of all who had helped put Antigua on the map as a prime sailing destination over the decades.

He told the young sportsmen and women that the key to success was more than just being a good sailor. “Even more importantly, you must be a good ambassador,” he said.

Meanwhile, Nelson’s Dockyard where the championship will take place, is abuzz with action and excitement. Many of the teams have already arrived and children have been out testing the waters ahead of the races which are widely seen as a pathway to the Olympics.

The 2019 Optimist World Championship is being staged in Antigua for the first time in its history from July 6-16. It is only the second time it has been held in the Caribbean after Dominican Republic hosted it in 2012.