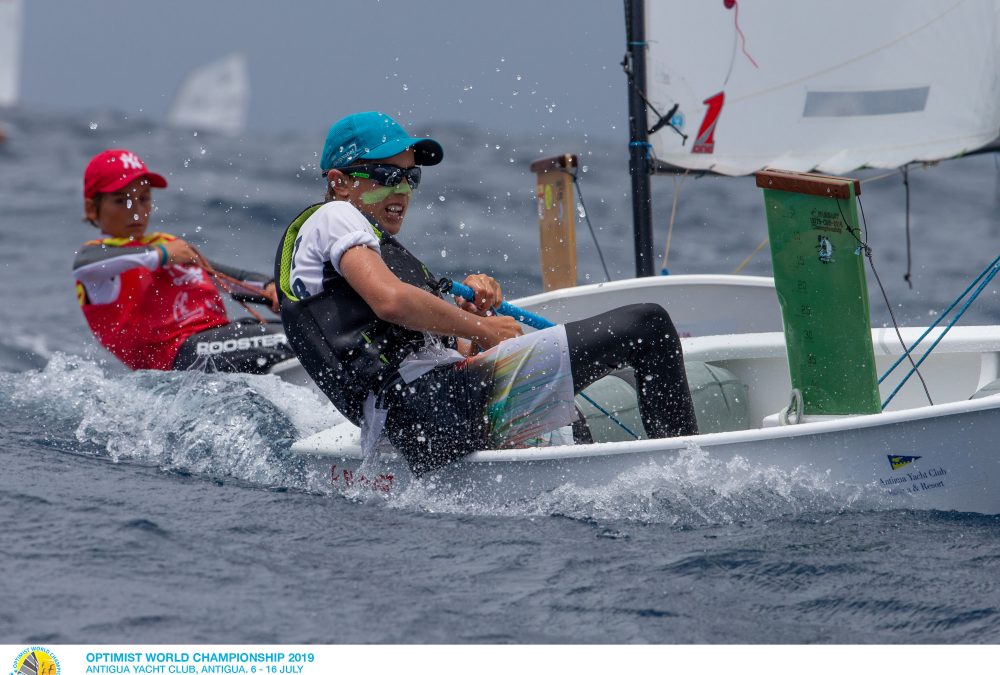 HEAVY squalls, a fleet recall and dive-bombing seagulls combined to create a dramatic day on the water for young sailors competing in the 2019 Optimist World Championship.

Winds reached up to 26 knots and rain pelted down on Saturday during the first day of the finals, prompting race chiefs to summon 63 boats back to shore.

It was a tough call for course rep Luis Ormaechea who made the decision to pull back the entire emerald fleet during the second race.

“It was not an easy day and visibility was not good,” he said. “All four fleets completed the first race but by the second race it became very difficult to control so many boats.

“I decided to send the emerald fleet ashore to make things easier. The green fleet was chosen because they have less sailing experience.

“Recalling a fleet doesn’t happen very often but it does from time to time; safety is the most important matter,” Ormaechea added.

Saturday was the first day of three scheduled days of finals with sailors divided into gold, silver, bronze and emerald fleets according to their performance during qualifying rounds earlier in the week.

Host nation Antigua’s team of five were among those ordered to retire.

But that did not stop them enjoying the invigorating surf, said coach Rhone Kirby.

“They were exhilarated; those are the conditions they love the most,” he added.

“The squalls were really fun; at one point I could not see anything. It was mean out there,” enthused New Zealand’s Amelia Angus, 14.

“I could see a big wave coming and I was praying, dear God, please don’t let me capsize. It was sort of frightening but mainly fun. I just had to hike really hard. I think I did pretty good today.”

“Three of us were in the gold fleet; I am in silver. I had a good first race but during the second race I broke my tiller.”

“When it happened, at first I thought I would have to give up. Then I decided I would just try and do as best as I could. I came last but I finished,” Ethan said.

Meanwhile, Antigua’s wildlife continues to enthral many of the 255 competitors, aged 11 to 15.

“The birds are crazy. My friend got a sandwich snatched straight out of his hand while sitting in his boat,” Ethan laughed.

“I love Antigua so much; it’s so nice,” Amelia added. “I saw a stingray when we were swimming and our coach saw a huge turtle.”

It is the first time the prestigious championship – widely seen as a pathway to the Olympics for promising young sailors – has been staged in the Eastern Caribbean. It has brought an estimated 1,000 people to English Harbour during the district’s traditional slow season.

The contest will culminate with a prize-giving ceremony in Nelson’s Dockyard on Monday evening from 7.30pm.

The 2019 World Champion will be presented with the Beacon Challenge Cup.

Gold, silver and bronze medals will also be given out, along with prizes for the first 20 sailors and the top three girls.

A rousing performance by Antiguan band Spirited – featuring homegrown cricketing legends Richie Richardson and Curtly Ambrose – will draw the event to a close.