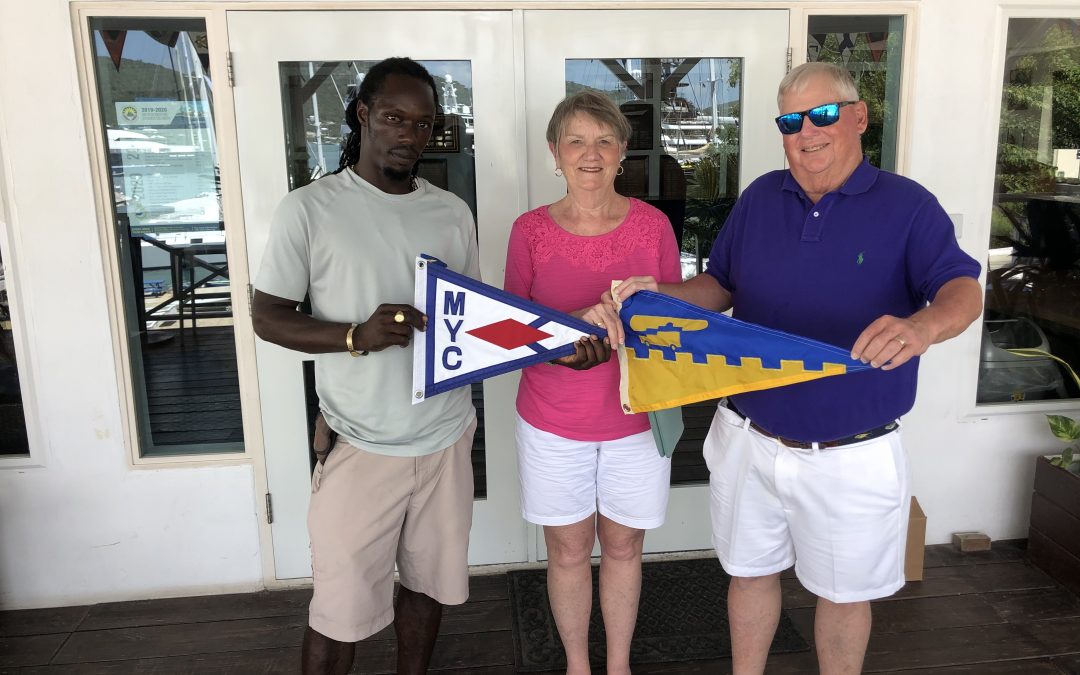 It was indeed a pleasure meeting with Kathy and Bill Sterns and exchanging our club’s burgee with theirs.

Mathews Yacht Club is located on Stutts Creek’s north shore in Mathews County, Virginia. Stutts Creek accesses the Chesapeake Bay through the “Hole-in-the-Wall” at the southern tip of Gwynn’s Island.

The Club is on Yacht Club Road in Mathews County. Directions

The Club is governed by a twelve-member Board of Directors elected each year at the Annual Meeting. Meet our Board

With the end of World War II formal and informal wartime sanctions against recreational boating were lifted. Many began to again enjoy outings on the local waters and during this period the Mathews Sail and Power Boat Racing Association was formed. In 1947 the Mathews Yacht Club was organized with approximately fifty members meeting at the Mathews High School.

While racing was the Club’s first priority, the officers and directors began a search for a permanent home. They chose Stutts Creek for its depth and easy access to the Chesapeake Bay and purchased property on the Creek.

The  Mathews Yacht Club was chartered on June 2, 1949. Sixty members subscribed to stock for a clubhouse. Many early Club members became the construction force and the clubhouse site was laid out and a temporary pier was built. On May 13, 1950, the Mathews Yacht Club was dedicated at a ceremony featuring special guests State Senator W. Marvin Minter and Virginia House Speaker William A. Wright. An oyster roast followed  and the celebration continued well into the night.

By 1952 the Club had installed gasoline tanks and pumps and had added a waterside screened porch and a second pier. Sail and power boat events continued every summer and in the fall and winter when weather permitted. The membership grew as summer residents from Richmond and Hampton Roads joined.

As the membership grew, the Club added a pool in 1963 and added jalousie windows to enclose the porch. By the mid-1960s regular summer Saturday night dinners were routine. As social events grew in popularity, the kitchen was remodeled in 1966.

By 1975 Club membership was approximately one-third Mathews residents, one-third Richmond area residents and one-third Hampton Roads area residents. The membership cap was increased several times and as the number of boats at the Club or belonging to members grew, a third pier was built in the early 1980s. Ramp use increased and a storage building was added.

Increased membership, more families, more functions and an expanding annual event calendar necessitated a capital expansion in the late 1980s. In 1991 the Club expanded the manager’s duties and hired year-round management. Two piers were rebuilt and expanded and the pool area was enlarged. The outdoor storage facility became an enclosed snack bar.

The Mathews Yacht Club was created by and for its members. Those members have brought the Club from an informal “boating club” with no facilities to its present position as one of the premier clubs on the Southern Chesapeake Bay.