Burgee Exchange with Collingwood Yacht Club based in Canada 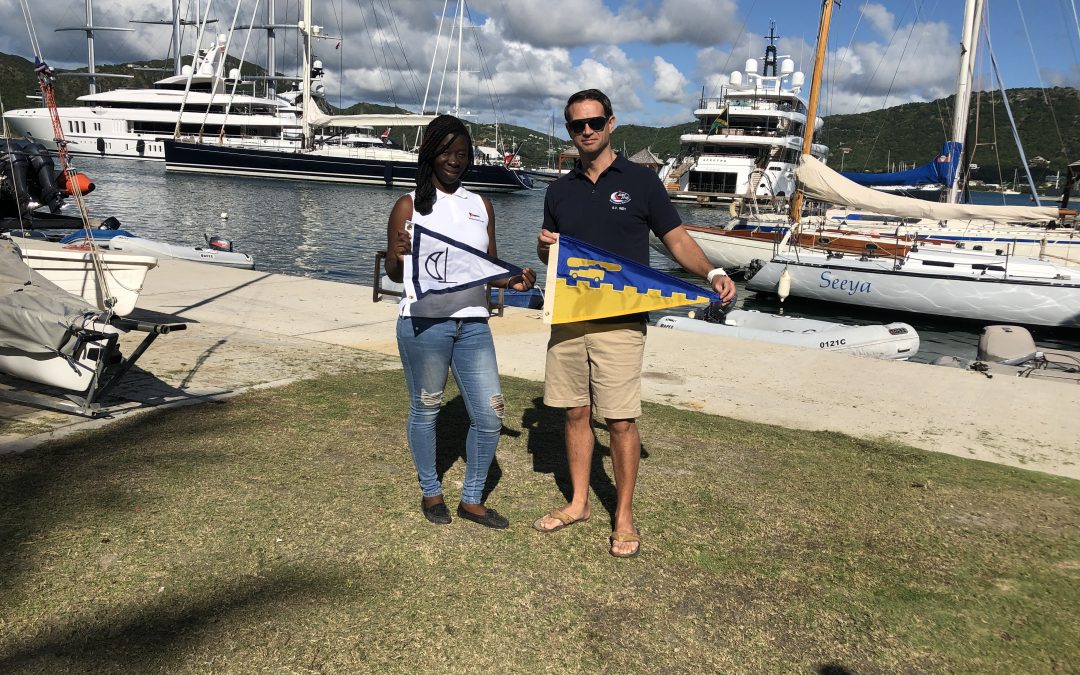 It was a pleasure meeting Vice Commodore Jason Ruttan of Collingwood Yacht Club located in Canada!

The Collingwood Yacht Club (CYC) is located in Collingwood, Ontario, Canada.
The town of Collingwood was incorporated in 1858, nine years before Canada’s Confederation, and was named after Admiral Cuthbert Collingwood, Lord Nelson’s second in command at the Battle of Trafalgar, who assumed command of the British fleet after Nelson’s death. A similarity shared by the Antigua Yacht Club being located next to Nelson’s Dockyard named after Lord Nelson. In 1855, the Ontario, Simcoe & Huron (later called the Northern) Railway came into the town of Collingwood, and the harbour became the shipment point for goods destined for the upper Great Lakes ports of Chicago and Port Arthur-Fort William (now Thunder Bay). Shipping produced a need for ship repairs, so it was not long before an organized shipbuilding business was created. On May 24, 1883, the Collingwood Shipyards, formally known as Collingwood Dry Dock Shipbuilding and Foundry Company Limited, opened with a special ceremony.
Within the aforementioned years Canadian yacht racing at large had also grew significantly starting with the Chester Race Week in Nova Scotia which was an annual event since 1856. And just South of Collingwood in Toronto the Royal Canadian Yacht Club, founded in 1852, has 4 trophies that date between 1872 and 1887.
In 1888, the Georgian Bay Yacht Club of Collingwood organized a sailing race. The Georgian Bay Cup was awarded to James Playfair as the winner of this race contested by rival sailors from Midland and Collingwood. The ”yachts” used for this race were Watts Skiffs. These were working boats of the day whose regular service was to harvest food from the bay to feed the local population. Although due to changes in the economy over time the Georgian Bay Yacht Club ceased to continue its existence and the Georgian Bay Cup trophy was lost.
Sailing remained a favourite past time throughout the years and in 1972 a small group of race oriented sailors hosted a regatta off Collingwood and invited Thornbury sailors to participate. The event was a huge success and well documented in the local newspaper. A steering committee was formed and in 1973 the Collingwood Yacht Club (CYC) was created and incorporated. The Club constitution ensured local control of the Club. This local control of voting members and club executive has been maintained for over 45 years.
In 1973 there were approximately 15 sailboats moored in the Collingwood Shipping Terminals Basin, thanks to the generosity of the Collingwood Terminals LTD and CNR, by the end of year one, there were 75 CYC members.
Today the Collingwood Yacht Club accommodates well over 100 moorings and a greater number of members and affiliations. In rotating years, the club hosts a number of sailing events including the Georgian Bay Regatta celebrating its 35th consecutive regatta in 2020, the Meaburywood, an annual race between the respected sailing clubs from Medford, Thornbury and Collingwood, and the Georgian Bay Cup. Fortunately, the original Georgian Bay Cup from 1888 was found in the possession of a antiques collector in the United States. A number of Collingwood Yacht Club members recovered and refurbished this cherished relic. Each summer sailing vessels come from all over to compete and the cup is once again offered as the annual prize for the winner of the Georgian Bay Cup race.
For more information about the Collingwood Yacht Club or the Georgian Bay Cup please visit: www.CollingwoodYachtClub.com
Or the recent article featured in Canadian Yachting Magazine:
http://www.nxtbook.com/kerrwil/canadianyachting/december2019/index.php#/14