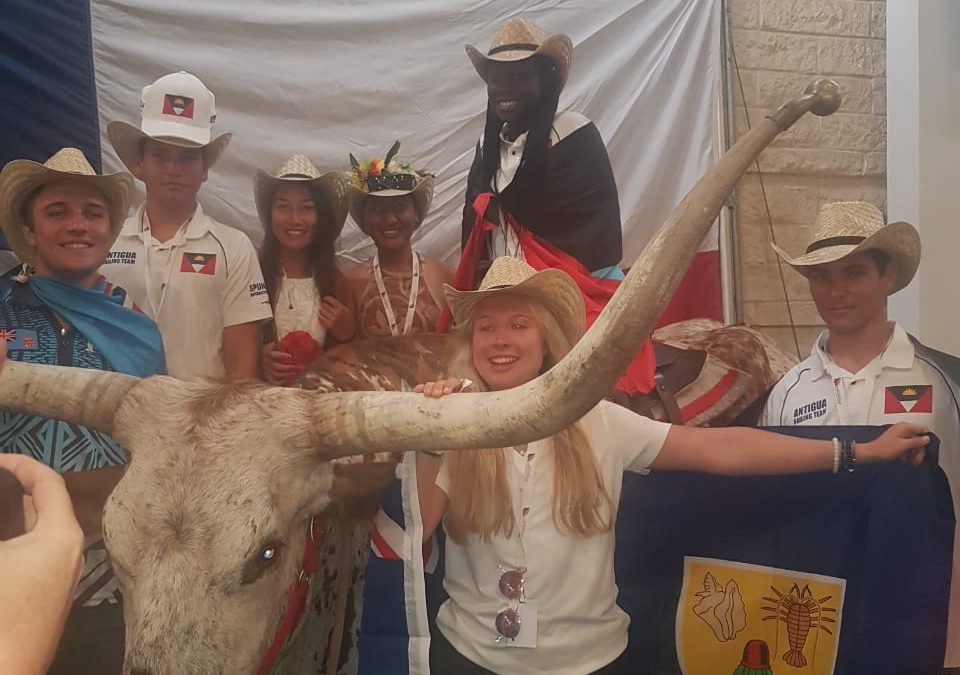 In July a team of youth sailors from the Antigua Yacht Club travelled to Corpus Christi, Texas to compete at the 2018 Youth World Sailing Championship.  Led by Olympian and Coach Karl James and Team Leader Vanroy Gordon, Jalese Gordon (Laser Radial), Daniel Smit (Laser Radial) and Rocco Falcone with Louis Bavay ( 29er) competed with over 400 athletes from 60 countries.  Jalese Gordon, along with 19 other sailors worldwide,  was awarded an Emerging Nations Scholarship, and therefore travelled a few days earlier to  Texas than the rest of the team in order to participate in a three day training camp.  She achieved ranking in the top 5 in this pre-event which gave her confidence going into the regatta.  Racing for all classes started on July 15 and continued over 5 days until July 20.  Like clockwork at midday, the breeze filled to between 10 -23 + knots as the land heated up to 35 degrees Celcius. Two races for the Laser class and three for the 29er each day made for a demanding physical daily schedule.   The best results of the team were posted early in the regatta. This was Daniel Smit’s first international event and he had a great 2nd day posting a 13th in a fleet of 58 sailors.  Rocco Falcone and Louis Bavay scored an 8th on their first day of racing in a competitive 25 boat fleet.  The length of the regatta, intensity of the competition and the high heat humidity took a toll as the event progressed over the five days and some fatigue certainly slowed the team down.   The team gained considerable experience that they can apply to improve their sailing in the months ahead.  Significantly both Daniel and Jalese are at the low end of the age requirement and can therefore still compete at the youth world events for three more years.  A big thank you to the Antigua Yacht Club for assisting in getting the team to Texas, and also to Simon Holt for providing the cool team uniforms.